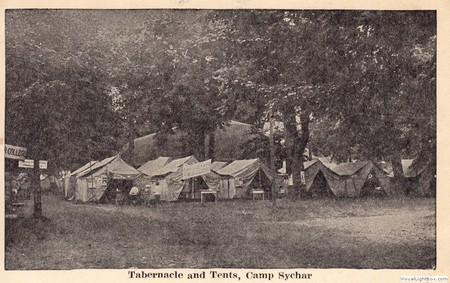 Camp Sychar Now And Then

The minutes show that a “Bro. Mays” of the Waynesburgh Camp Meeting desired to rent some equipment from the OSCMA to use between the July and August sessions. The arrangements are recorded.

“Resolved that Bro. Martin be instructed to rent Bro. Mays for his Waynesburgh Camp Meeting as many of our 11 x 17 tents as he may want at $3= a piece and freight from Mansfield to Waynesburgh and from Waynesburgh to Youngstown to be paid by Bro. Mays, and deliver them in good condition to us again. -- Also that Bro. Martin be instructed to rent Bro. Mays such other articles of our tent equipage as Bro. Mays may want, at the following rates. Old Tabernacle $25=, Dining Hall Tabernacle $20=, Lanterns 25 cents a piece for all but 4 to be placed in the old and three in the new Tabernacle, Altar Screen $5=, 11 x 19 tents $5= a piece, Bed Clothing 25 cents a piece. For anything further the treasurer is to exercise his own discretion, all goods to be returned in good condition.”

“At the call of the President, the Association met in the President’s tent. On motion of Bro. Dennis that the motion by which Bro. Martin was authorized to ship our old bedsteads to Youngstown be rescinded -- after some discussion, the motion prevailed.

“In 1875 the Ohio State Camp Meeting was held at the Fair Grounds at Mansfield, Ohio. The Association did not have a permanent meeting place but was required each year to find a suitable site for the next camp meeting. In a meeting of the Board at the 1875 camp meeting it was “moved that a committee of two be appointed to look out a suitable ground to purchase for the use of the Ohio State Camp Meeting Association and report at our next annual meeting. The chairman on looking up Camp Ground site reported that there is a grove near Canton that may become available.”

“There were 453 communicants, 38 of whom were ministers. At last evening of our services, there were present some 3,000 persons. Bro. Leonard preached with powerful effect, having received that Baptism of full salvation at the last Urbana Camp Meeting. It has been estimate that nearly 100 persons have received the blessing of Holiness at this meeting, and a goodly number have been justified.”

The Association members (the Board) met in Loudonville, Ohio on October 5, 1875 for their annual business meeting.

“Committee on purchase of grounds for use of the OSCM Asso. (Bro. Graham, chairman) reported verbally. In view of the fact that there seems to be some opposition to the purchase of grounds or the location of the camp meeting, the committee has done nothing. The report was accepted and committee discharged.”

During a business session the following question is recorded in the minutes:

The Association was encountering some opposition from local churches and clergy including a Presiding Elder of the Methodist Church. The minutes state, “A communication was received from Dr. Hunter, P.E. of the Canton District, requesting the Assoc. to broaden its platform next summer so as to embrace the general objects of a Camp Meeting; and indicating a purpose, in case his request was granted, to hold no Camp Meeting beside in the District; but to rally the ministers and members upon the District to ours: whereupon a discussion arose on the general question of the expediency of broadening our platform, pending which discussion the Assoc. adjourned.”

“Wed. 1 PM -- Assoc. met and we opened with prayer by B. W. Gorham. The subject which was under consideration at the adjournment of the morning sitting was resumed and considered at length; when it was ‘Resolved: that we make no change of the platform but hold our next Camp Meeting as we have held the former ones. Dr. Miller was requested to write Dr. Hunter a fraternal letter stating the action of the Assoc. with assurance of brotherly greeting and treatment of himself together with any ministers and members from his District that may choose to attend our Meeting next Summer.”

Also during that “sitting” the Association “Resolved: that we hereby forbid all sales of tobacco, cigars, lemon ade, soda-water, ice cream, melons and all such articles at any of our Camp Meetings hereafter.”

“Resolved: that no Grocery shall be open on our Camp Grounds hereafter on the Sabbath.”

At the close of the sitting, “Dr. Miller was appointed to take the name and P.O. address of each party who shall be converted or reclaimed or who may experience the blessing of entire sanctification at each service of our next Camp Meeting. He will also take names of persons who may join the church, which names he will forward to the several pastors concerned.”

In November 1873, the members of the Ohio State Camp Meeting Association met in Canton, Ohio at the “2nd ME Church.” Business included: “Moved that we hold our next Camp Meeting at Mansfield, Ohio, if satisfactory arrangements can be made by the executive committee also obtaining refusal of grounds for the following year.”

“G. A. Towman & Impertus Martin members of the executive committee of the Ohio State Camp Meeting Association visited the State Fair Grounds at Mansfield, Monday, May 18th, 1874 with a view of determining if satisfactory arrangements may be made for holding the Camp Meeting of 1874 upon same grounds -- learned that all the buildings upon the grounds were to be removed and some had already been torn down. The Fine Arts Hall and the Mechanics Hall were yet intact with the exception of the outside sheeting of the F. A. Hall had been removed. A promise was made to the committee and Bro. Allison that these buildings should remain until the committee determined as to the location of the Meeting.”

“Monday, May 25, 1874. Three members of the executive committee... met upon the State Fair Grounds at Mansfield, Ohio and found that the Mechanics Hall was being torn down and therefore none but the Fine Arts Hall might be retained upon the grounds for the use of the Camp Meeting. Other things did not look very inviting. The committee agreed if certain conditions could be complied with on the part of the church and certain privileges secured by the Association that the Camp Meeting might be held here.” The conditions were met and the Camp Meeting for 1874 met at Mansfield, Ohio August 12th to 20th.

“Our Camp Meeting (first held on State Fair Grounds at Mansfield, Ohio) closed in the usual way, on Thursday night August 20th, at 10 AM of same day the presiding officer Dr. S. Baker preached or lectured to the ‘Nearly Sanctified’ with powerful effect. It became very apparent that the God Spirit put his seal upon the discourse, quite a number during this camp meeting were sanctified and a number justified.”

To continue the historic account of the place of meeting of the Ohio State Camp Meeting Association. On October 31, 1876, the Board convened “in the M. E. Church, Mansfield, Ohio.” Item 9 of the Order of Business states: “Shall we hold more than one meeting in 1877? If so, where? The following places were named, Mansfield, Oberlin, Akron, Warren, Canton and Hollow Rock. It was agreed that we hold two meetings, to wit, Mansfield and Hollow Rock. When shall the meetings commence and how long continue? the meeting at Hollow Rock shall commence Aug. 21st and continue ten days, the meeting at Mansfield shall continue nine days and the time for commencement is left with the executive committee.”

The minutes show that in July of 1877 and “extra meeting” of the executive committee was held.

“The executive committee of the Ohio State Camp Meeting Association met in extra session on the camp ground at Mansfield, Friday, July 20th, 1877 at 10 o’clock am. Members present: Painter, Ball and Martin. Bro. Painter was elected chairman pro tem. The object of the meeting being stated by the secretary and various communications being read relative to the difficulties attending the Hollow Rock camp grounds. The following Resolution was offered by Bro. Ball: Resolved that, if the Local Camp Meeting Association of Hollow Rock keep possession of the camp grounds, and comply with their part of the contract with us, then, we, the Ohio State Camp Meeting Association will perform our part of the contract, and hold a camp meeting upon their grounds commencing Tuesday, August 21st 1877. Unanimously carried.”

On August 1, 1877 the Ohio State Camp Meeting was in session at Mansfield. During that camp meeting the Board convened on August 3, 1877. the following action was taken:

“The following Resolution was offered and unanimously accepted. Resolved, that we, the members of the Ohio State Camp Meeting Association for the promotion of holiness do deeply sympathize with the local Association at Hollow Rock and would most gladly hold a meeting with them this year, but owing to the legal difficulties (sic) pertaining to the grounds, we respectfully withdraw our acceptance of their invitation to hold a meeting there until their difficulties are removed. Resolved that a copy of the above Resolution be sent both to the Stuebenville Herald and Gazette for publication, also to the president of the local Association of Hollow Rock.”